The Chesterton High School Debate team has been looking to shake off last year’s results and it appears (at least through October) that they have done so. The team finished the month of October with three strong performances at an individual and team level.

The full team competed in person for the first time at the Concord debate meet on Saturday, October 9. The team had winners in both divisions of Policy debate in the form of Mark Jewison and Milena Veltri as the champions of varsity and Gwen Lester and Katerina Markwart taking home the title at the novice level. Freedom Eiden and Riley Hawksworth took 5th place in varsity and the team of Brayden Blouir and Jonathon McClure came in 7th. In the novice division the team of Patrick Hansen and Rian Goins came in 3rd and Evan Hibshmen and Lucas Koch were 6th. Ronnie McLemore won the novice division for Lincoln-Douglas; which served to continue to strong start for CHS students in the event. Emily Fleischhacker was 3rd, Andrew Julian came in 6th, and Marley Mayer rounded out the places in 8th. At the varsity level, Gretta Burke was 3rd and Sophia Worden (7th) and Katie Pampalone (8th) also placed.

The team’s fourth champion came in the form of novice Congressional debater Payton Whalen. Seniors Savannah Hutchinson, Ethan Kroft, and Brody Gorski came in 3rd, 4th, and 8th respectively at the varsity level. Finally, the team of Emma Ekblaw and Sidney Pittman finished in sixth place in Varsity Public Forum and the team of Greenlee Black and Cailyn Hilliar were the fifth best novice team.

Chesterton won the next tournament (although it was a limited event due to the size of the host school. At Bethany Christian, the team accumulated 67 points to defeat the defending state champions of Munster by 16 points. Nathan Osborn went undefeated and took second place in the Varsity Lincoln-Douglas division. Burke was 6th and Worden came in 8th. Fleischhacker once again took 3rd place in novice Lincoln-Douglas and Julian improved his placing to come in 4th. Tilon Woodard was 5th and Cadey Oleck came in 6th overall.

The team took four of the top five places in the Varsity Public Forum division with the team of Saanya Agarwal and Zander Fish winning their first event of the year. They were followed closely by Riste Miroski and Sam Burris (2nd), Hamza Sahli and Megan Nowka (4th), and Darek Shatat and Joshua Fieffer (5th). Kroft improved on his prior performance and was the runner-up in Varsity Congressional debate while Hutchinson once again finished in the top three. Moneice Johnson placed 8th in the novice division.

The team’s third and final meet once again proved that this ‘get back to normal’ year will still have some oddities. Unable to host its traditional tournament this year due to building commitments from Purdue, West Lafayette jr/sr High School hosted an ‘all Worlds School’ tournament. While Chesterton does not regularly compete in this event, the team felt that it was important to seize every opportunity for in person competition this year. World School teams are made up of between three to five debaters. While there are two rounds on a prepared ahead of time topic, this event requires students to prep on two topics without access to their coaches or the internet.

After discussing private space exploration for two rounds, students were presented with the following resolutions: This House regrets Tik Tok and This House would change the age of adulthood to 16. One of Chesterton’s five teams went undefeated on the day and took third place. That team was made up of a mix of its policy debaters (Jewison and Veltri) as well as its Public Forum team (Shah, Agarwal, and Fish). Additionally, a team made up entirely of Lincoln-Douglas debaters (Burke, Osborn, Julian, Worden, and Ethan Markwart) finished with a 3 -1 record to take home fifth place. 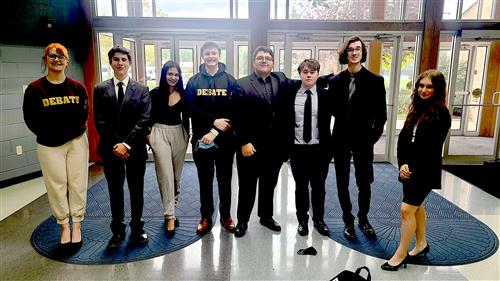 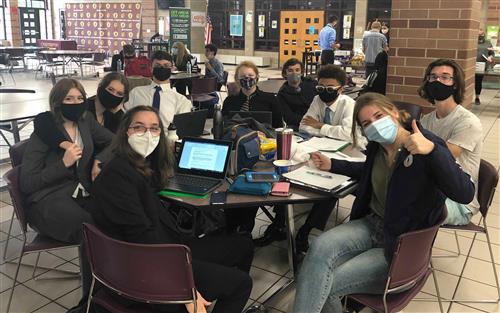