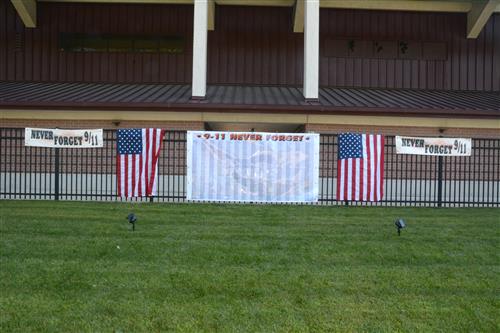 A traditional, yearly memorial the Duneland community has come to love and appreciate, will again be altered this year due to COVID-19.

Each year since 2007, Chesterton High School students and staff members have continued the tradition the O'Keefe family began of placing 2977 small U.S. flags in the grassy area in front of the CHS Stadium along 11th St. in Chesterton. Each flag bearing the name of a soul lost on Sept. 11, 2001 in the tragic attacks on America.

This is the second year in a row the display has been changed. “I wanted to find a way to make it a little more meaningful because it's the 20th anniversary,” said Whitmer. “Due to this weekend’s Homecoming festivities, I’m hoping that more people will have an opportunity to see it and reflect on the impact 9/11 had on our nation.

Whitmer would like to stress the importance of taking a moment to reflect on the 9/11 tragedy despite the current events we are facing. “We should remember how this event brought us together and we must never forget,” she added.

This year’s 9/11 memorial will be displayed in front of the CHS Stadium throughout the entirety of the homecoming weekend beginning on Friday, September 10. The display will feature two large flags alongside a banner adorning each individual victim’s name and will be illuminated throughout the evening.

History of the Flag Setting Commemoration at CHS

Kathleen O’Keefe (2008 CHS Grad) started the first commemoration. At the time she was a charter member of the CHS Conservative Club and was assisted in part by her sister Colleen O’Keefe (2011 CHS Grad) and several other volunteers. Together they approached businesses and individuals to donate money to purchase the flags and secured permission from school administration. Colleen would continue the tradition every year thereafter, coordinating volunteers and working with the school planning the event. In 2012, their sister, Kasey O’Keefe (2015 CHS Grad) took the mantle in coordinating the event, approaching students and faculty for volunteers, gaining administration permission and serving as public relations officer. Several volunteers gave their time and energy to this memorial, including her sister Hayley O’Keefe. Hayley continued the tradition until 2016 when she also graduated from CHS.

A Story of Flags

There are 2,977 flags placed on the grass of Chesterton High School. Each flag carries the name of an individual who lost their life in the tragic attacks of September 11, 2001.